What’s on your sleeve?

Since learning that I received one of the Surly Amy grants to attend this year’s TAM, I have been, like many others, reading up on harassment issues at conventions. And then, there seemed to be an explosion of harassment all around. There was good stuff, too, like new policies on dealing with harassment at specific conventions. So it wasn’t all frustration, with grumbling reactionary swearing from behind my computer screen.

Several people, not naming names because I being vague. Oh wait. I am being vague because really, I only heard rumors that several people were so concerned about dealing with harassment at TAM, that they didn’t feel comfortable attending. This isn’t any of the more well known people I am talking about, who have made their actual reasons for not going very clear. But I’ll turn the camera onto myself here, because I was a bit concerned about it, I must confess. I wondered how I might deal with it. What if there are pervs with up skirt cameras? What could I do that wouldn’t involve a, “Ma’am, you’re making a scene, could you please leave?” scenario. Just to name one possibility. Just saying, I grew up with five brothers, and I can take care of myself and anyone else being harassed.

Well, I don’t know if this will help, but I like doing things that are funny to me, so I have done a little something. Backstory time! In May, I went to a craft fair in Cincinnati, and someone was selling some felt pins for $3 apiece. I took one look at the vendor’s sign, cracked up, and bought one from her, telling her they were fricking awesome. I had really only intended to make a batch of the same kind of pins to hand out to some friends at Dragon*con in September, not actually thinking that I would get the TAM grant and get to go to that. But then all that happened, and all the harassment chatter, and I decided I would bring a huge batch to TAM to see if anyone wants to join in.

And with that, I bring to you, my batch of vulva pins. I plan to wear mine on my sleeve. Because sometimes, you kind of have to, you know? Because when it gets to the point where people are afraid to dress a certain way because of a handful of perverts/stalkers/harassing fucktards, it feels good to say right up front, “Yeah I wear my vulva on my sleeve, and no, you can’t fucking touch it.” 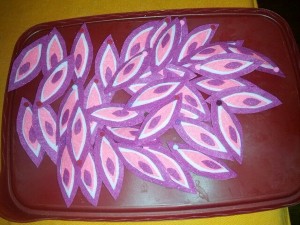