Hey there, folks! It’s RoxyKaye again. I have finally gotten a chance to pop over to the new shop on the Roundabout a stone’s throw from The Contract House, and the owner was nice enough to allow me to draw her portrait.

Her name is Sunday Charles, and I am not quite sure where she’s originally from, because her accent is kind of off a bit, kind of like the folks from our sister city up in Dickensville. (That’s not a reference, by the way, the sister city to Scurvytown actually is a place called Dickensville, located on the Santaland Islands way up in the frozen tundra of the north.)

Also, I have been branching out from simply drawing people, which are my favorite subject matter, to drawing buildings around the town. Magby says we can set up a sort of virtual tour for folks to get a feel for what our little island looks like. She says it’ll be more fun than simply posting photographs of the buildings. Something a bit more personal about an artist’s rendering of a place, she said. I am inclined to agree.

Here is my drawing of the exterior of Sunday’s Sundries. That little cat sat outside the building for an hour, and I was beginning to think it was some kind of gross taxidermy pet, but when I got closer, it looked right at me, hissed, and marched around to the back alley. 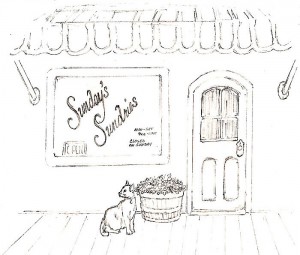 I have one last drawing to share, but this one, I am afraid I cannot simply post without a warning. I had no idea there are all kinds of weird rules and restrictions about content that gets posted on the Internet. I had Magby look over the site so far to see if I missed anything, but luckily, nothing is in violation. I am really glad I showed her my drawings beforehand. We had to look up the warning code before I could post this drawing. Official Warning Code from the NSFW Decency Act of 2017: Code 13.6. This means that the following link labeled “Code 13.6 NSFW Drawing” should not be clicked on if you happen to suffer from clown fear.