I have been wandering around my favorite local park on Saturday mornings, taking photos of the first green shoots of spring. More than that, though, I like to snap photographs of the new growth and the previous season’s decay.

It’s that last one that is getting to me right now. Or maybe not even right now. Maybe it always has bothered me and perhaps it always will. People change, friendships shift, you move on or become better friends. And it’s a tough situation, or it can be, when those things don’t align to what you want. Or when you discover a friend has changed into someone you no longer recognize as an ally in your life. Or maybe you’re the one who has undergone a grand transformation. It could be so many things. I suppose it could be nothing at all besides the decline of novelty.

The first time I visited the park this year, there was still snow on the ground. There were places the sun hadn’t reached to melt. There were flowers poking through, all the same. Crocuses and winter bells had pushed through the dark earth and brought forth a sense of hopefulness for, if nothing else, warmer weather.

Those first flowers are exciting, like meeting someone new, someone with whom you click. Someone who seems more special than other people you have met. Someone who seems like they are going to matter for a long time to come. And maybe you feel like that person feels the same way about you, that they value your friendship as much as you do theirs. That hope is there, that they care as much for you as you do for them. And if they don’t, then those feelings of insignificance can be a bit overwhelming, until they, too, begin to decay into dust. 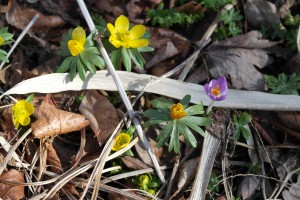 The second time I visited the park this year, there was no longer snow on the ground. Some of the previous week’s crocuses had begun to wilt. Perhaps it was a mid-week snow shower that brought them down. I spied a patch of yellow crocuses with a single purple one off to the side. I felt a kinship to that purple flower, that spoiled the color scheme. I felt a twinge of sympathy for how much it seemed to want to fit in. Then I remembered personification of flowers is silliness. I snapped a few pictures and moved on.

I thought about how hard it is for me to burst through the winter months. The coldness and lack of sun always tear away at the bits of me that are filled with joy and delight. I try so hard to keep myself awake, keep myself interested in anything. I spend so much time fighting myself, there is little time for anything else. Other than work responsibilities and, if I am lucky, a few gatherings with friends to get me experiencing something outside of a tiny apartment’s drab dove white walls.

The third time I went to the park this year was yesterday. I packed my bicycle into my car, which involves taking it apart so it will fit properly. Wrestling it into the car was probably hilarious to my neighbors. At least I hope it was. I pedaled around the road that encircles the pavilion, half uphill, half downhill, feeling the slap in my face of a cold breeze as I sped on. After a couple of trips around the park, I packed the bike back into the car, grabbed my camera, and continued my quest to photograph the moment between novelty and decay. 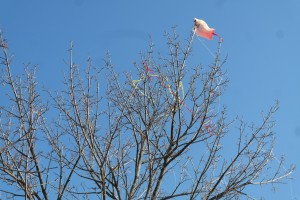 Standing high upon the pavilion, I looked out over the park. I counted the sun-bleached kites caught up in tree branches, as I usually do. The trees, barren of leaves, hide little. You can still see the top of the Observatory’s silver domed roof in the distance. I watched a group of boys arrive, all laden down with backpacks, and then I descended the stairs and walked into the garden pathways. I smiled and nodded at a fellow weirdo with a camera, an older asian gentleman, with a much nicer camera than mine. Then I proceeded with my study in decay. 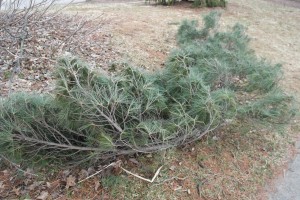 A branch fallen off a nearby pine was still lying there at the tree’s base, and I snapped a photo of its now wilting needles. I took a photo of where the branch used to be attached to the tree. I took the same photos the week before, a warmer day with a bright blue sky. Yesterday was drab and a bit chilly. As I wandered more, I wished the sun would make an appearance, even for just a moment’s warmth. Eventually it showed up, but did not stick around even long enough for me to snap a shadow photograph of myself. Maybe if I had remembered immediately, but I did not.

I took a weird note of the contrast of my excitement of the first crocuses of the spring thaw, to noticing new flowers had joined them topside. The crocuses were yesterday’s news compared to the daffodils, and the daffodils not quite as exciting as the crocuses had been.

I feel like I shouldn’t be making this connection between that kind of novelty and friendship. Or decay and friendship. I can’t help the comparison, however. I could easily discard this entire silly notion, I suppose. Though I could not, cannot, so easily push aside a friendship.

I have lost friends in the past, through gradually growing apart. And other ways, of course, though I’m not up for mentioning those, at least not today. Recent shifts I have noticed in behaviors and conversations with certain friends leave me feeling saddened. I am not just mildly dispirited that I sense a shift into failed friendship, but I very arrogantly feel sad for such friends. Because I am entirely awesome, and oh, how they will miss out. But realistically, they probably won’t miss my friendship at all. And that’s quite probably the whole point of the failure. 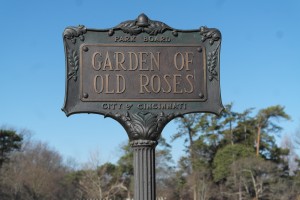 One of the gardens in the park is called “Garden of Old Roses.” I shared a picture I took of the sign and an acquaintance said she thought it read, “Garden of Old Trolls.” So now, of course, I call it that. I think, if I were a more superstitious sort, and this was my private garden as opposed to a public space, I would want to bury trinkets of lost and/or “perceived to be failing” friendships there. Not to hope they would grow into something more, but to let them continue to decay. Maybe some of them wouldn’t lose that battle, or give up so easily to rot. Maybe some of them would take root, and grow into something more. They might even propagate, but I would never get my hopes up for that.

Figuratively, for this can only happen in the imagination, I have done this. Instead of watering the grave sites, and hoping every day that something will happen, that exercise in futility that is “wait and see,” I step away, leave it to the Earth, and continue my quest. Because I don’t intend to stop the progression of decay, only to study it, and learn from it, and perhaps become better at future friendships, and choosing ones that will endure.