When I was in high school, my younger brothers and I walked dogs for PAWS, the local no-kill shelter in the crappy town where none of us is a hero (yet).

I had started walking dogs my junior year to get community service hours needed for National Honor Society. I think I was 16 when I started accruing hours, but kept coming back after I got my necessary time because it was a good thing to do and it was a lot of fun. Later that year, in the fall, (I was 17 by then) we showed up on Saturday like we always did, and there were the cutest little puppies there, a boy and a girl: Asia and Egypt they were called. I forget which was which now, but my brother Kevin probably recalls because that nerd remembers everything- except that the year we got her was 1995 and not 1993 (neener neener, Kevs!).

I remember my brother Kevin was smitten with the puppies and after we got done walking the older dogs, he called my mom to tell her about them. Mom drove up to see for herself, and I was pretty much like, “No way is Mom coming home with a new dog.” So I left in my crappy POS Ford Escort that looked like someone had dredged it from the bottom of lake Erie, and figured that was that. They would come home and we’d still be dog-less, which we had been since we had to say goodbye to our toy poodle, Heidi, about a year and a half earlier.

But this amazing thing happened when they returned home from PAWS. They came home with the female puppy. I don’t recall the debate of naming her. In trying to dredge up that memory, I feel like we maybe just let Mom name her, but I honestly don’t remember.

What I do remember is the puppy peed in Mom’s shoes, but after 3 days, newly named Phoebe was potty-trained without further incident. She was adorable, looked kind of like a panda cub, and it was clear to everyone: this was a deeply intelligent canine.

Phoebe was an absolute joy, and training her was effortless. One time, I wanted her to sit, so I made a downward motion with my hand, saying nothing, and she instinctively sat. She didn’t just do what was asked of her. She seemed to intuitively know what we meant.

When it was puppy bath time, she’d hop straight into the bathtub, endure her torture, and the subsequent blow-drying of her oodles of fur. Then it was her favorite part: new bandana time! She sincerely seemed to love it, and I swear she would parade around proudly for days afterward. Such an even-tempered and sweet dog.

Our older brother, Kelly, used to get Phoebe to talk. It was quite the spectacle. He’d get her to say catch phrases, like “Show me the money!” and “Taco Bell” like the chihuahua in those silly commercials. It’s hard to say what was funnier, hearing the dog sort of repeat words like, “Out” and “Walk,” or Kelly’s antics as he tried to get her to speak.

Over the years, she developed a close bond with Kelly, as dogs with Chow in them tend to pick one family member to dote over. Once Kelly moved out, Kevin was her new favorite. They’d go on super long walks, and on rare instances, I’d go as well, and we’d take her over to the nature trails at Miami University Middletown. But the thing that sucked about taking her for a car ride was that she always got car sick. She couldn’t even make it 3 minutes down the road to the vet without either vomiting or drooling everywhere. We used to get her to ride in the car with a barf bucket under her mouth when attempts to keep her head out the window repeatedly failed.

When Kevin moved out, I think my Mom became her new favorite, but I am not sure, because I, myself, had moved to another state at the time. When I returned, Phoebe was already over 10-years old and it was beginning to show. Quite the old age already for a 90-pound dog! I don’t want to dwell on her later years, or the debate no one likes to think about pet euthanasia. I hated having those conversations with my mom, but no one else seemed to want to talk about it. Not that I wanted to talk about it, but I’d lost a sweet kitty in 2006, so I will end this anecdote with a conversation about healing through inappropriate humor that my mother and I had when she called to tell me the sad news. She didn’t even have to say it; and I already knew when I heard her voice. I hope I was one of her easier calls. Eventually, our conversation turned to the bizarre side of the macabre:

Lauren: So I kind of feel like the whole Rainbow Bridge thing that people always talk about when they lose a pet is kind of bullshitty, but I dunno, I kind of feel like maybe Phoebe and The Baron (my sweet departed orange kitty who got along amazingly well with Phoebe) are hanging out over there.

Mom: *sniffling* I can see that!

Lauren: So even though it seems like crap, I dunno, I kind of feel like, fuckit, I’m buying a GD unicorn and riding over to the Rainbow Bridge.

Lauren: OMG. I … can’t believe you just said that.

Mom: I just mean, when you put a horse back in the stable, if it gets wet you’re supposed to dry it off.

Lauren: Um sure you did, but inappropriate humor, that helps. 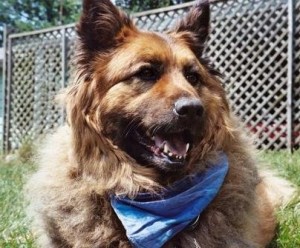 Goodbye, old friend, you will always be loved and missed.