One of the things that helped get me back into writing when I moved back to Cincinnati in 2008 was a monthly event called Creativa. The website hasn’t been updated in awhile, but a lot of the info is still accurate. It happens every second Saturday, and the location is still the massive dead mall aka The Zombie Mall in Forest Park.

A quick note about performing at Creativa: As always, it was a pleasure to share a stage with such awesome local performers. As was articulated several times last night, many of us have come a long way in refining our arts over the years. We who live in the Cincinnati area are incredibly lucky to have this safe space to share our varied artworks, and to experiment with new arts in a nurturing environment. Much love to all who call/have called Creativa home.

I hadn’t attended for awhile, but returned to share some work in January. I missed the February event because it was snowy and gross and I didn’t want to venture outside. Still, I was asked to be the featured performer for the March event, and I jumped at the chance.

I wasn’t sure what I wanted to perform. But I thought about performing part of my thesis, which if you hadn’t heard me go on and on about, starred Emily Dickinson as a time traveler. I had performed part of the first act at another event last year, and it was well received. I thought the most fun way to present the piece would be by using puppets. My mom had gotten me an Emily Dickinson puppet awhile back, and I had a few others that I could use as the other characters. All I needed to do was to build a theater for them.

This is what I built, and it only took a weekend. Most of the actually time-consuming portions of the build were related to waiting for paint or glue to dry. I had most of the materials already in my craft stash, I just needed fabric for the curtains, and red felt for the walls and such. It was really fun to make, and other than being so terribly tiny that it is best for very small audiences, the only other issue I have with it is portability. But now that I’ve successfully built a puppet theater, I can see what I need to do differently on future models, in order to make them larger and more portable. 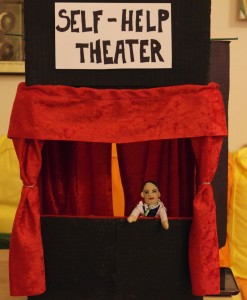 This is me actually at last night’s performance. I had joked to one of the organizers of the event that I would wear my unicorn suit, and he dared me to do it, so I did. I was slightly disappointed that more friends didn’t show up, but I can easily shrug that off because my mom, brother, brother’s fiancée, and an old dear friend all showed up. I was pretty tickled to have anyone show up to support me, and I am very grateful to those who did attend. 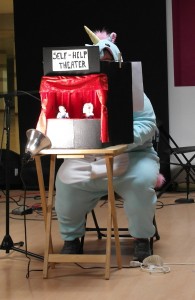 On the drive home, I thought a little about the first time I met the dear old friend who showed up. I was painfully shy for a lot of my twenties, at least my early twenties, and on a whim, I had decided to meet up with some ladies I knew from an online music fan message board (RIP WOXY) for a Ladies’ Night Out. It was my first time really hanging out in a bar, first time hearing a live show in a cramped bar (hey Cincinnati, remember Opi Yum Yum?). I felt safe and welcome with these new friends, and it was the start on my path to getting out and experiencing the world. In retrospect, that all could have ended much differently, and could have shoved me further into creepy reclusiveness. Instead, I enjoyed being out in the world, meeting new people, making new friends, experiencing life, and creating new memories. Before that, my writing was fairly stagnant, and centered on characters trying so desperately to be something, anything, and not being much more than desperate. When I learned what it meant to be alive, and to share experiences, I really began to understand how much my painful shyness was just me, getting in my own way. Although it was slow-going, my writing began to mature along with me, and I learned to observe the world around me like a member of it, rather than some boring old video recorder.

I suppose that is how I came to perform puppet theater last night. I wanted to try a new thing, to experiment, to see how it worked, to adapt it based on what didn’t work, and to have fun doing it. Having no idea how to build a theater, I just did it anyway. Having no idea how to then move the puppets, show them interacting, I did it anyway. I split my script into two acts, and after thinking about how the first half had gone, improved the second half, making it more fun, and engaging better with the audience. Learn, adapt, grow. These are just a few of the marvelous things that can happen when you take a chance, make things happen, and don’t let anything silly get in your way.