I used to drive past what looked like a tiny park called Owl’s Nest Park on the way to work. Just on the other side of O’Bryonville, right next to a sign that says, “Welcome to East Walnut Hills,” this quaint stretch of greenspace is 1.5 miles away from my apartment. It is also a gradual hilly bike ride up Madison. I biked up there today, after getting annoyed with a bunch of insects at Madison Park, where I had stopped to chill and think about some things.

This morning, I learned that one of my grad school friends, whom I worked with on Sugared Water, died in her sleep. Shawn was roughly my age, and is the second person I knew this year who just passed, so very suddenly. I had enjoyed seeing her posting artworks in progress, and the preparations she was making for her upcoming nuptials. It hurt a lot to learn that she won’t get to follow through on those things, but even more, I think it hit me hard because she was a lovely person who was very supportive of other artists… and I felt a bit of a kinship to that, I think, because it’s so very important to support each other. She also did an amazing painting for her final project in a Moby Dick course that looked incredibly feminine, and in fact was an exploration of Queequeg and Ishmael as female gender types, which I think is a rather interesting point to take in analyzing the novel (which I am totally going to admit, I have not read).

Anyway, so I thought a lot about this thing I often think about when wandering through the park and taking photographs, and that was the shadows cast by people and objects. 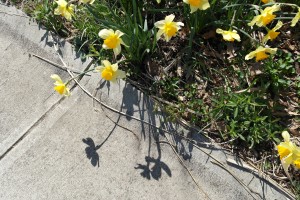 I took this photo in the “Garden of Old Trolls” a couple of weeks ago. I am about a week behind on writing up posts about my park trips, but whatever, moving forward from this point seems best. I liked the shadows cast by these daffodils onto the sidewalk, and the story they tell about time of day, lack of cloud cover. You could maybe guess how late I had gotten to the park on this day, but you couldn’t know how crowded the park was, or that someone with a much nicer camera than mine had just walked past me, as I got ready to take a few last shots and head back home. You might not know that this group of flowers is on my usual last few moments in the park, or that one week, I started here and worked my way backwards from usual. And sometimes I think about the shadows we cast, and the paths we take in life that means we cast a shadow here or there, and then how it will one day be nowhere at all.

Today, I found a park bench in the shade, and locked my bike to it, so I could walk around the circumference of Owl’s Nest Park. I discovered that it had been renovated in 2010, which is not a time that I really ever drove past it. There is a staircase down to a second tier of the park, which has a baseball diamond and a really shiny, new looking basketball court. I hoped that there was a restroom in this building that overlooked the ballpark area, but all the doors had locks on them, so who knows what the frak those are for? I walked around to the park sign, much more aged than the ones in Ault Park. 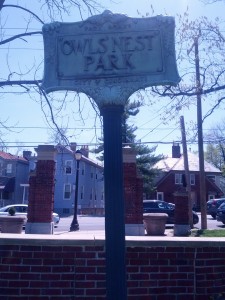 I pretty much shot this onlooking the sun. And I didn’t have my fancy camera with me, so this was just my cell phone. The buildings in the background are part of the O’Bryonville strip, I think. Or maybe they’re not; they could be considered East Walnut Hills, for all it matters of neighborhoods in Cincinnati.

After this, I walked back to my bike and sat and wrote for awhile, finally beginning to make some progress with a project that had me stumped yesterday. I am aiming to finish this project by next Sunday. I think it’s weird that it’s something my friend would have enjoyed, and she’ll never get the chance to see it. I wish like hell that this wasn’t the way of things, but it is, and there’s no changing that. I am just glad I got to know her at all, and remember her fondly. And totally geek out about that time I went to a party at her house and got fangirled by a couple of people over a thing I’d performed at an open mic we were all at.

Anyway, trying not to be too sad. I let sad win for a bit today, then kicked it to the periphery so I could get things done, because what the frak else was I going to do?

I sat around the park thinking for a bit, and then walked my bike across Madison to safely join the traffic. The whole way home was generally downhill, and it felt so good to have the wind whip through my hair, as I coasted along the tiny bike lane. When I hit the gradual hill a few blocks from my street, it was easier than ever before to pedal up it, having conquered much tougher hills just a bit earlier. In this town, every bike ride is a mixture of hills, and you’ll always end up having to pedal uphill, no matter which route you choose, on the way there and back again. It’s a strange little place, indeed, and I suppose this little Hobbit is stronger overall, for living here.