Half a Year in Blues

It has been almost six months since I dyed my hair blue. As it has grown back out, I have kept it cut short, freshened up the color every so often, and enjoyed being a chameleon. Right now, there is probably more brown than funky color showing, and I’ve re-dyed some of the blue to a deeper intensity, and all the rest, dyed purple over what remained of blue. I like to call whatever is going on now with my hair “blurple.”

Being blurple isn’t a lot different from being blue. I still get hit on by folks I am buying stuff from – hey there, two different dudes at two different bread stores. Most of the time, I forget my hair is any kind of weird color. I go to the park, and people look at me sideways, or smile and say “good morning” or whatever. The sideways glances trigger the reminder my hair is blue more than anything. And the polite folks always just make me smile and say “good morning” back because apparently friendliness is in my nature. Except when Team Introvert takes over.

Friday night, I was feeling stir-crazy and hormonal, so I went to see a coworker play some music on the outskirts of this really cool market I totally need to revisit sometime when it is actually open (and dang, I cannot believe I have never gone there before). Team Introvert held dominion over my actions, and so I just sat and listened, observed and wrote. And I wrote some pretty damn important things, all about cleaning up the chaos in my writing life, and setting up some structure on the projects I want to finish. Once I was satisfied with my organization in my notebook, I sat back in my seat a bit and looked up at the sky. Watching the clouds pass by overhead and not worrying about a damn thing while a two-man band played in the background was entirely peaceful and felt like exactly what I didn’t know I needed. And at that moment, nothing could break that feeling of serenity, except, in my head, one thing: engaging the other humans in conversation. 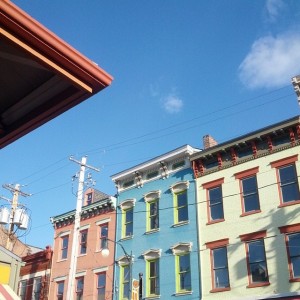 This was my view for most of the performance. For awhile, there was a cat sitting in the window of a building just outside the right side of the shot. It looked like it was listening to the music, and it also looked a lot like my departed cat, Baron von Stinkerton. It cracked me up the way it just sat there, looking down at everything, most likely more interested in the birds that were hoping the humans would drop some food, than anything else.

And then, like a total dick, I left when the music stopped, instead of even saying hello to my work friend or telling him they sounded good (and they did, really nice ambiance). Selfish in my peaceful frame of mind, I returned home, sat for awhile in contemplation on my attempt at organizing my writing life. At the very least, I did end up messaging my friend to say the music sounded good, even though in retrospect, I should have just said so in person. Duh. Selfish writer brain. Seriously, it knows damn well that interacting with others helps spark ideas.

And then, back at home, I fell asleep with my clothes on, which was weird, but thankfully I had taken my bra off because that would have been a world of ouch to wake up to. It was comfy, too, because the weather took a chilly turn this week and it’s like we’re having an actual spring this year. So when I woke up, I bundled up and went to the park, this time remembering my hiking boots, and that if I parked at the bottom of the hill, that meant the hard climbing part of my hike would be first. So there was this: 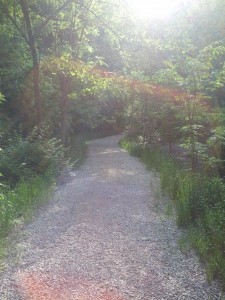 And then I climbed up a massive hill when I should have gone sideways and up a little more gradually, and I ended up leaving the trails before I was ready to. I’d gone to find interesting nature bits for my sculpture class that started a few weeks ago. So I wandered through the park a little more slowly than usual. And then I sat down next to some flowers and took a selfie. Likeso: 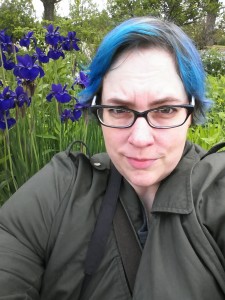 That’s me in the “Garden of Old Trolls,” beginning to wonder if it was going to rain.

I wandered around the grounds a bit more, found some nice acorn caps and a pinecone, and I pocketed them. There were tons of photographers in the park this morning, taking family photos and/or photos of kids. I was going to go check out the view of the sky from the top of the pavilion, but I was getting weary of the crowds, so I bailed. It began to rain as I headed to a plaza in search of Second Breakfast, and by the time I got done running errands, the rain had stopped. The air smelled rich and fresh of petrichor.

I went home to finish packing up some things that needed to go out in the post. I sat my acorns and pinecone on the floor and watched my orange cat bat them all to various corners of the apartment. I still haven’t found at least one of the acorn caps. And then I proceeded to fritter away most of the day lazily, getting a few chores done here and there. All the while, in the back of my mind, this writing that I am trying to push to the forefront. I am going to figure out how to focus my energies into that. And, since this post has deteriorated into a ramble, I’m gonna take this full circle, and do this thing while my hair is bright blurple.

In reading back through this a bit, I think the key point I figured out on Friday night when I was just sitting back and relaxing was how important the act of relaxation is. Just letting go for a little bit, sending worry off packing, was such a hugely positive moment. In the instance, where nothing else mattered, where I turned off my overactive imagination and just observed without comment, a glimpse at the sky a selfish act not to be shared with anyone… I feel like I am breaking free from whatever I have been letting hold me back.