Last year at this time, I decided it would be awesome to go fly a kite. Next, I will bore you with excuses as to why I didn’t. I was in the midst of defending my thesis (the anniversary of that was April 3rd and I passed without revisions, which was quite an exciting feat). At that time, I think I had a bit too much going on to actually take the time to do this thing that I thought would be so much fun.

In July, I went on vacation to visit a friend in Texas, and I bought a Sponge Bob kite just for kicks at a little shop in a tiny town. We didn’t end up getting to use it, and it didn’t fit in my luggage, so I left it behind at the ranch for someone else, hopefully some kids to find and take out for fun.

This year, after a much nastier winter than we have seen in Cincinnati in ages, I once again felt this yearning to fly a kite. Only, I didn’t want to just buy one; I wanted to make one. So I researched a bit online and discovered that all you really need is a plastic bag, some dow rods, tape, and some lightweight string. So I made a kite out of a bag I got when I was in the study abroad trip in London. It looks like this: 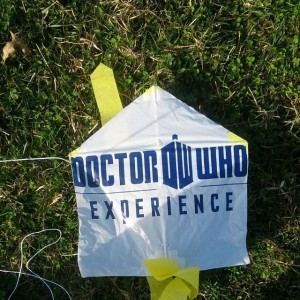 I waited patiently for the weather conditions to seem favorable for kite-flying. One day this past week, they seemed fairly optimal, so I did a search for the best spaces in the area for kite flying. Someone mentioned a place I’d never heard of called “French Park,” so I researched it and discovered that it was right down the road from the gym where I took that Zumba class last weekend. I drove there after work on Tuesday and explored the full length of the park, looking for a decent spot away from trees. I noticed when I turned the car around that I had driven considerably up a slight hill, so this place was going to be even better than I thought, because it was at a higher elevation.

I parked the car in one of the small lots and checked to see where the sweet spot was on the bridle. I tied the line on and set about making the damn thing fly. After about twenty minutes, I realized the knot I had tied wasn’t secure enough for the winds, even though I had thought I did a pretty good job on it. I had a sliding bridle line. But I planned for this contingency, so I cut the line and tied a new one. (And I just realized how much this entire paragraph sounds like a metaphor for my failed marriage- LOLZ.) This new knot was much more secure and had minimal slippage. And after only about ten minutes of playing around with it, this happened, with very little effort from me: 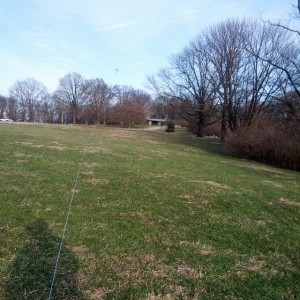 I was ecstatic. Such a thrill of delight rushed through me as the wind pulled the kite, made it dip and dive and shake a bit. The shakiness of the flight indicated how I can improve on the design, and so I look forward to making new versions of this same design before I branch out into other shapes and styles. It is a pretty neat hobby to have, I think.

And what, then, of the park where I first got the idea that flying kites would be fun? Of course, that was Ault Park. And the remnants of kites in the trees inspired me, both to learn to make and fly my own kites, and to choose a location other than Ault Park to fly them. Because this place is vast, but it also seems too have too many obstacles. Here is a photograph I took yesterday morning: 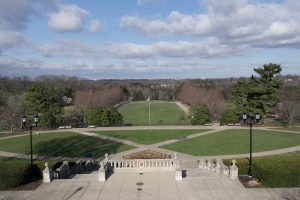 And here, three of the remnants of kites that I like to look at whenever I go on my Ault Park explorations: 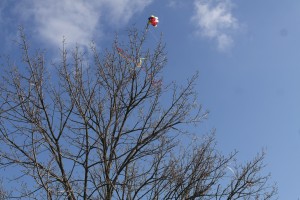 I guess right now it might seem an appropriate time to say, “You know that thing you’ve been wanting to do? Go do it. Just find a way and go do that thing. Stop making excuses. Be awesome.” I could say all those things, some other things with similar sentiment, and some combination of encouraging words to try to get someone, anyone to just get up and be awesome. But really, is anyone going to really hear what I am saying here? Do I have to expel this many words just to say, “Shake off your complacency and go do great things!” It’s all very assuming anyway. You might already think you’re achieving optimal awesomeness. But you know what? You’re probably not. And that’s really okay. As for me, I’ll be over here, trying to do something more than okay. And maybe that’s not for you, so my response to that is that I’m not judging. I’ll just be over here, trying to make a better kite. Because you know what? That metaphor about my failed marriage kind of works here, too. That entire experience was holding me back, and once it was over, I began to soar.

I think that anytime is the perfect time to assess your situation and see if there is anything holding you back. Maybe you didn’t even see it because you were so entrenched in making a non-working relationship seem functional. Or maybe the stress levels of your day job have filtered into the rest of your life. I know that has happened to me before, and it isn’t a thing I really let happen any longer. Maybe it is something else entirely. Maybe there is nothing. Maybe you are doing everything you want to do, when you want to do it. That’s pretty cool, I guess. As for me, in my current state of mind, the only thing that holds me back is me, and I do that less and less. And I definitely see a correlation between getting shit done and whether or not it is winter. Spring is nigh, y’all. For me, that means it’s time to get to flying.