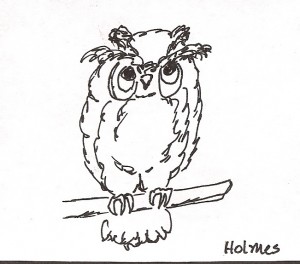 He's such a hoot!

You know what they say about birds of a feather, right? Yes, they flock together.

It’s one of the most annoying punchlines I hear at my night job, to be honest. I have this regular guy, see, and he tells this joke all the time. If I thought for a second he was savvy enough to find this blog and actually take the time to read it, I wouldn’t mention it. On second thought, maybe he’ll find it and read it and oh, miracle of miracles, stop telling the stupid joke!

And then maybe I can stop having to pick feathers out of my teeth once a week, but ah, I’ve said too much.

Re-focus, Roxy… okay, so about the bird in my sketch. This cute little guy lives over at The Boneyard, which if you’re not from Scurvytown, you might not know is pretty much the happening bar around town. There are other places to get tanked, of course, but a classier sort of clientele is found stinking up the joint at The Bone, and it’s within spitting distance of work, so quite a few of us are frequent customers there before the night shift starts.

Anyway, the owl’s name is Holmes, and he’s a sweet little fellow. Apparently, I am in the minority on this one, but what can I say? I’m an affable dame. It’s a wonder I don’t have all manner of woodland creatures helping me to get dressed each night before my shift, like on one of those princess cartoons. At least that’s what Holmes’s owner, Catty Broadsides, likes to tell me, and in some alternate reality where I’m not a call girl, I like to think she’s right.