One of the best days of the year is winter solstice. This, of course, is because we get more hours of daylight. We had thunderstorms last night, which I mostly slept through, fitfully, however. I dreamed I was online shopping, for things I don’t need. In the dream, I was arguing with myself, that this so-called retail therapy would not make me feel better. Rather, doing kindness to others would help assuage whatever sadness plagued me. The dream seemed to have more of an end than most dreams, in that I didn’t listen to my better sensibilities, made the order anyway, and regretted the indulgence. If nothing else, my subconscious seems to think I should be more frugal, more kind, and to listen to reason. Can’t say I disagree with any of that.

This morning, there was sunshine, which made me happy. I cannot even remember the last time I saw sunshine. That might be a bit hyperbolic. I think I recall some sunshine while I was at work last week. I took a photo of my blue hair in the light. And my blue nails, which I need to swap out the polish on since I accidentally took it off two fingernails when I was de-blue-ing my bathroom sink last night. 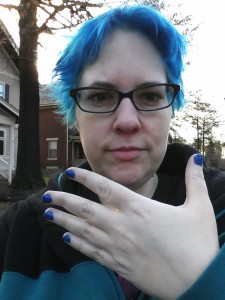 I like the blue hair, though I think I might like the blonde even more. I think I might go blonde this summer, just for fun. I had forgotten how much I enjoyed radical changes of appearance. It’s kind of fun to wander outside, a blue aberration from the norm. I like it for the social experiment aspect of it, even if I don’t always enjoy the idiotic assumptions people make about it. So much for people saying shit like, “I don’t care if someone is white, black, brown, or purple.” Someone walks into a room with bright green skin, folks are gonna take notice and have something to say about it. They certainly seem to get a chuckle out of blue hair, too. If your assumption about my blue hair is anything other than I am awesome, I probably don’t want to know about it.

So anyway, this post isn’t so much about feeling blue as being blue. Or something.