Moving day approaches. So many hours I spent in this tiny space, cluttering it up, more and more with each month. The more time I spent outside of it, leaving the clutter to its own devices, the more impressive the disarray became.

I think part of this happened because I was staying in one place, whatever you want to infer from that. The thing is, I had moved just about every year for the 4 years leading up to landing here, and moving a lot teaches you a lot about how unimportant stuff is. This place was just supposed to be convenient while I was in grad school, but it’s been almost two years since I graduated, and here I have stayed.

A lot happened here. Three weeks after moving in, I lost the job that was taking every bit of my sanity that I would foolishly let it have. I temped a lot, threw myself into grad school and writing, got a pretty sweet job in academia, and things have been generally okay. Well, aside from the time I threw out my back. That was the worst, but my mom came to stay with me, and helped get me literally back on my feet.

I have been ready to move on for awhile now, but I was being picky when it came to finding a new place. I wanted something closer to work, but I wasn’t really loving anything I looked at on the west side. So I started hunting in the Desales Corner area, but gentrification… so that stuff is already out of my price range. I stalked Craigslist nearly every day, and then one day, early in winter break, I found a place in O’Bryonville. It had a few flaws, but nothing that was ultimately a dealbreaker. And for roughly the same price I pay now, at least 200 more square feet. So, room to move around without knocking things over. No more walking out into a hallway and feeling like I’ve stepped into a bong. No more turning around in neighbor’s driveways because on-street parking is a pain in the ass on my current street.

And then there were other little things. Like the street number is a palindrome, and there’s a front porch and a firepit in the yard. And I only have an upstairs neighbor. And the oh-so-tempting bakery down the street keeps weird hours, when I am usually at work, so that won’t be a problem.

So anyway, I am excited, and packing, and purging crap out of my life for good. I am enjoying the feeling of change that a new year brings. I think I will be making better positive choices this year. At the very least, I plan to try.

On that note, here is a photo I took of some trees last November. I love the contrast in it, if that is even the right word. 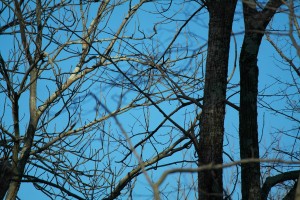