I have moved on from wandering the gardens at the park to wandering the trails. It was inevitable, as the trails are less crowded than the gardens, and I am not one for large clusters of folk. Also, when I wander the trails, I have a tendency to let my imagination run even wilder than usual. Maybe I am on an away team mission, exploring some planet, searching for a beacon in some old civilization… some old civilization that sure kept up its nature trails nicely, and had even removed the honeysuckle in places. When I am walking the trails, I usually don’t bother listening to tunes, I just enjoy the sounds of nature, the skittering of critters, the calls of birds. And I explore. 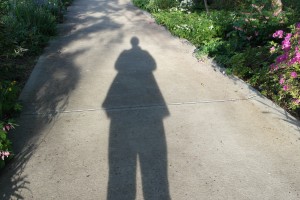 I am a discovery writer. That is how I work best. I was thinking about this a bit the other night while watching a friend play tunes at yet another venue in this city I’d never been to before. I have been doing a fair bit of that lately, going to places that are new to me, and listening to things outside of my usual preference. In my head, this is another form of exploration, another method of discovery. And all of it twists and turns to the same destination: the joy of storytelling. Some of these paths are meandering and misleading. Some of them have so many obstacles they seem insurmountable. And all of them are combinations of these and other kinds of wanderings.

There was a post somewhere online of some pictures of some abandoned rails alongside the very same nature trails I have been exploring lately. I immediately looked up a map of the trails to see at what point I would need to diverge in order to find them. So last week, I set out to do just that. Only I hadn’t looked at a detailed enough map, and so I chose the wrong starting point for easily finding it. I have a pretty decent sense of direction, so I figured out pretty quickly that I’d gone right when I should have gone left.

Because I went right, I saw some lady stretched out on a tree stump, working on her tan. Nearby her, someone had scrawled some words into a felled log. It wasn’t anything profound or deeply poetic, so I don’t even remember exactly what it said… something along the lines of how it must feel powerful to saw down a tree that had been growing for years. I shrugged at the thought, because I guarantee that tree was cut down because it was dead, or dying. Doesn’t seem to me like there is anything all that powerful about laying the dead to rest, besides being alive enough to do so.

Because I went right, I saw a stone being strangled by a root, quite the appropriate metaphor for things that have managed to upset my world in the not-so-distant past. At this point on the trail, I was pretty sure I had figured out where it was going to end up. And I was glad, because if I was right, it was going to end up near where I parked the car. As I walked, I thought a lot about this story I am working on. It’s a bit meta-textual, and a pretty bonkers idea, but given the source (me), that is not terribly surprising. I got this idea to create a story, based on this year’s garden and trails observations, and to thread it through everything in my writing backlog.

I walked along what I later discovered was called the “Cliff Trail,” stepped over a log and accidentally slammed my right arm into a branch. I hit it hard enough to know it would bruise, and that it did, epically so. A week later, it is still purple and finally starting to turn yellow and fade away. And, for the record, I did end up finding the exit was super close to where I had parked the car.

When I got home from trail walking last week, I searched for another map of the trails, and found a more detailed one that would have led me straight to the abandoned rail… which had I started where I started yesterday when I went for a walk, I could have saved myself the trouble. Sometimes, in discovery mode, bad choices are made. But there is something to learn from going right when left would have been the smarter choice, and I am definitely glad that in my life, most wrong choices haven’t exactly led me into an inescapable miasma of despair. Instead, I have learned, grown wiser, and hopefully learned how to be kinder, to both others and myself. Because I learned from my error, I re-calibrated and marched right back to the trails this week, determined to find the rails. 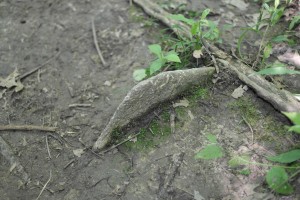 I stepped over this metaphor of a stone partially encased in earth. This one is more about perspective, I think. This could be just the tip of a much larger stone. I think it works like that, and also like the glass half full… is the stone being swallowed by the earth, or escaping? Or maybe I don’t care, so long as I don’t trip over it as I walk along the path. And it didn’t trip me up.

It turns out, the rails were even easier to find than I had imagined. There was a path to my left, a path that was rocky as frak, and littered with coal. As I climbed up, I steadied myself with a nearby plant, and let out a huge exclamation of “FRAK!” when I caught a look at the leaves, which were quite suspect for poison ivy. I looked a little closer and decided it had to be a young box elder, whose leaves are quite easily mistaken for poison ivy. Still, I was extra cautious from there on out, thinking it would be super lame to break out in a rash, being in possession of a botany degree and just generally knowing better. 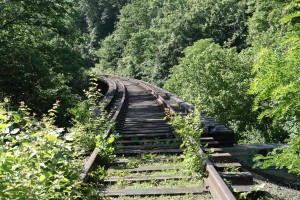 Once I was up on the tracks, I thought, “Well, this is pretty cool.” But honestly? The search for the tracks was more fun than actually finding them. I saw trees that had fallen over and crashed into other trees. There were trail joggers and folks with dogs not on leashes. Three of the unleashed dogs ran past me at one point, almost scaring the pee out of me. I also found a bench in a rather peaceful clearing, and I will probably return to that spot to chill and write some words someday soon. 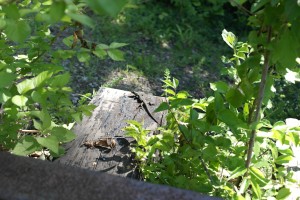 Once I was up on the tracks, I saw a lizard sunning itself. It let me get pretty close to take pics, which was cool. And it must have some damn good hunting grounds up there, from the size of it. After looking around for a bit longer, I decided that the trails themselves were a bit more fascinating than the abandoned rails, so I scooted down the path I had climbed up, getting coal dust all over myself. 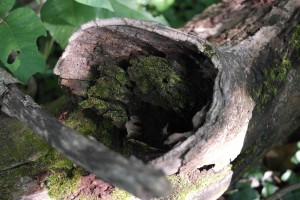 I got a new camera lens this week, and so I took it out into the trails with me, to see if I like it better than the one that came with the camera. This lens essentially turns my camera into a light-weight point and shoot, which is nice. It also gets some mighty nice details. I still want something with some zoom to it, so that is next on my list of things I am saving up for.

One of the things I have noticed when I choose to go right instead of left, or vice versa, is that I often pick the less traveled road, like some total dork who is super into Robert Frost poetry. The thing about the road less traveled is that while walking down it, you will break a lot more spider webs with your face than if you had chosen the other road. So all I am really saying here is you should be ready for that. 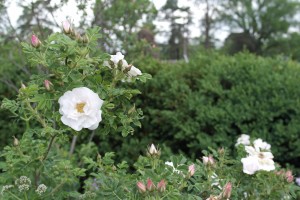 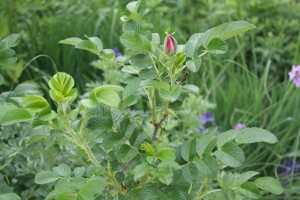 I want to close this with these two photos, which I took last week in the “Garden of Old Trolls.” Or it might have actually been earlier in May that I took them. The roses were just getting around to telling their stories. A lot of the focus of my current writing project has been on this small stretch of land. Walking through the trails has pushed those ideas along a bit. But nothing has pushed them along like getting out into the world and watching my friend play music. It’s kinda weird of me, I guess, and might even seem weirder still to this friend, who is a pretty new friend. I have been spinning my wheels for a short spell now, and it feels awesome to finally be getting some traction. And I can’t honestly say what for sure has given me the push I needed, other than it is probably a combination of things, not the least of which is that I was ready to be nudged along towards some new discovery.